Re-placing of the IEA Foundation Plaque 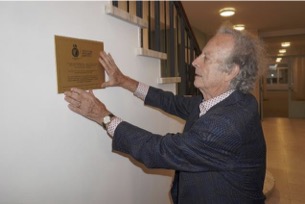 In 1990, in observance of the 30th anniversary of the foundation of the International Ergonomics Association, a plaque was placed in the building where the IEA was initiated. The story of the foundation of the IEA is as follows. After the Second World War the USA provided the so-called Marshall Assistance to stimulate the European economy. In conjunction with this, the European Productivity Agency (EPA) was founded. This agency started the “fitting the task to the worker” project, a platform in which people who were active in ergonomics and human factors found each other. In 1949 the Ergonomics Research Society was established in the United Kingdom. Although that Society aimed to be international, its founding provided a stimulus to ergonomists in other countries to found their own national organizations. In 1957, the EPA organized a seminar at 56 Wassenaarseweg 56 in Leiden, the headquarters of the Netherlands Institute for Preventive Medicine (NIPG). Participants at that event decided to explore the feasibility of an international ergonomics association. That led to the establishment of the International Ergonomics Association in 1959.

Participants at the 1957 EPA seminar in Leiden, the Netherlands.

As mentioned previously, in 1990 a plaque was placed in the building to commemorate the founding of IEA. The initiative was taken by Pieter Rookmaaker, then member of the IEA Executive Committee. In attendance at the unveiling of the plaque was unveiled were IEA President Ilkka Kuorinka, IEA Treasurer Brain Shackel and representatives of the Netherlands Ergonomics Society

Re-placement of the plaque

In 2019 when IEA Historian Ernst Koningsveld happened to walk alongside the NIPG building, he noticed that a major conversion of the building from an office/laboratory into apartments had just started. His direct action allowed the plaque to be secured.

On 19 October 2021 the plaque was re-placed in the entrance of the building. Because traveling for IEA officers is not yet simple these days, a small group of involved Dutch people attended the re-placement: Marijke Melles, president of Human Factors.NL, Pieter Rookmaaker, initiator of the plaque in 1990, Hans Dirken, one of the oldest members of HFNL, who also worked in the building in the sixties, and Ernst Koningsveld. An especially memorable aspect is that Pieter, Hans, and Ernst are the three honorary members of HFNL.

Today’s owner, Amvest, and administrator Van ’t Hof Rijnland are happy to have the plaque in their building: “Part of history of the building gets the attendance that it deserves.”

Revision of Core Competencies in Human Factors and Ergonomics

Perspectives on the future of work from South East Asia

Without ergonomics, no effective work-directed care for patients with musculoskeletal disorders